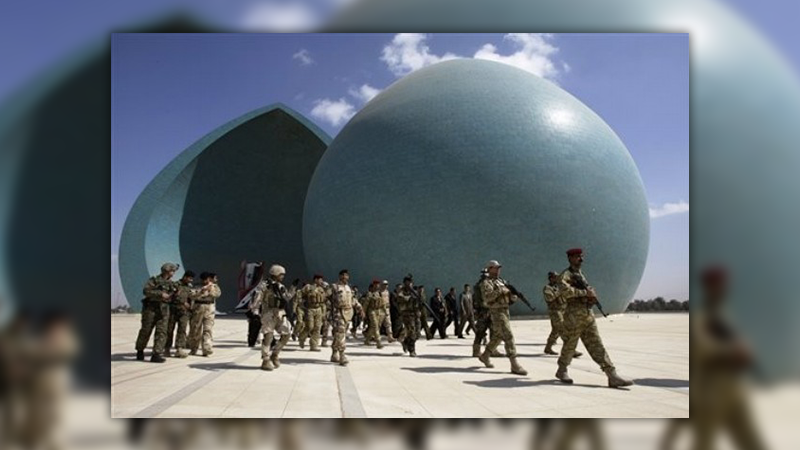 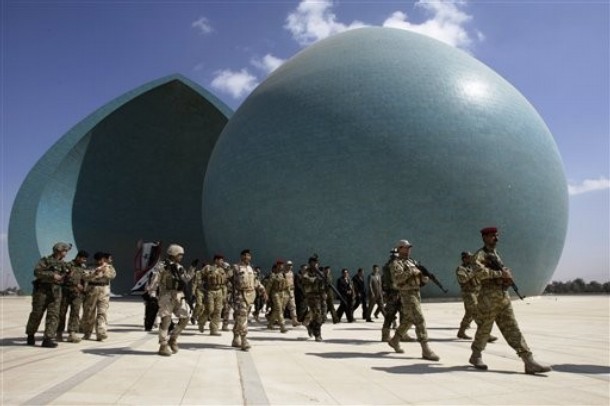 Iraqi soldiers walk in front of the Martyr’s monument in Baghdad, Iraq, Saturday, Feb. 28, 2009. The Iraqi military recently took control of the monument from the U.S. military. (AP Photo/Karim Kadim)

This morning I called Sattar to see how he was. I get no connection. He wrote already about the bad electricity conditions at this moment for the ‘normal” Iraqi who don’t live in the green zone. And sometimes just the connection is very bad. So I went to my Saturday morning sport but I felt uneasy with it. For the same the police caught him because of his filming. Coming home a couple of hour s later I called him again. “Oh Anne I am just home for 15 minutes he said”. He was on the police station. Because his brother who is a poet and writer was with him and the policeman recognized him as a friend of his brother they were lucky. Sattar was at that moment filming the monument for the Martyr and he wanted to get close by but that was the thing. You are not allowed to do so. It is very hard to film just on the street so they have to film out of the car and the car was to close to the monument…. We spoke about it and he will go to the minister of culture to ask for a permit. Sattar now is relieved and decided to stay home today. To morrow morning he has an appointment at half past five in the morning with a doctor to go to the hospital to film. Sattar your doing a great job!