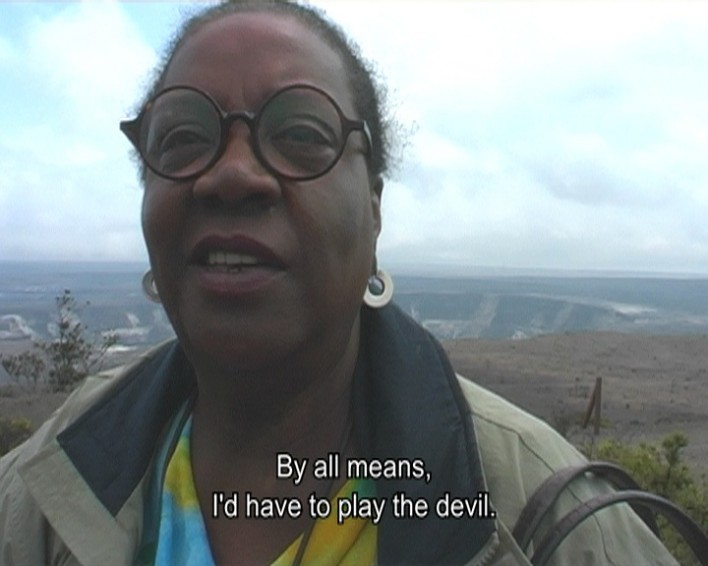 Visions of Paradise is a multimedia project developed by Anne Verhoijsen and realised by Stichting Splitzij and Kosmopolis. The central question is: what is your vision of paradise? Indirectly, the answers to this question provide a clear reflection of people’s deepest desires and rejections that they would have had difficulty expressing when asked about them directly.

Because paradise and its representation function as a free zone, an environment where our highest values have free reign, the conversations are not only about our imagination; they present a very compact summary of who we are and what really matters to us.

By using a religious story as a means to attaining a broader perspective, ‘Visions of Paradise’ stresses the parallels and similarities between seemingly different cultures. While inciting introspection and recognition, the work briefly highlights the otherwise invisible threads that connect all people. 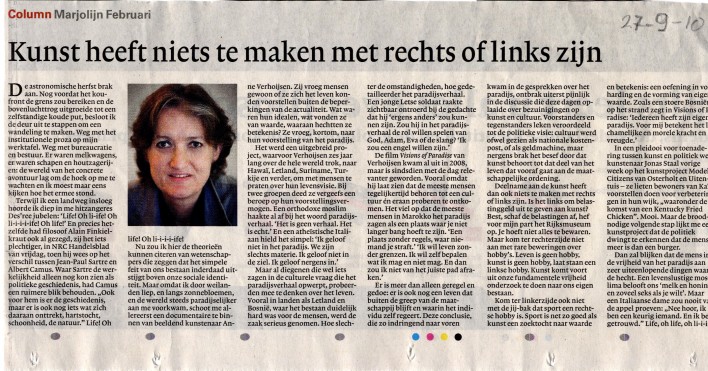 It is the start of the astronomical autumn. Just before the coldness can reach the border and the upper atmosphere has developed into an independent cold front, I decided to step outside and take a walk. Away with the institutional prose on my desk. Away with bureaucracy and government. There were milk trucks, sheep and a sawmill: the world of concrete adventure was just waiting around the corner and I had to take a look at how things stood.

While I turned off into a country lane, I heard deep within me hit singer, Des’ree’s shout for joy, ‘Life’ oh Li-ife! Oh Li-i-i-i-ife!’ Oh life! The exact same thing was said by a philosopher Alain, Finkielkraunt, only in a more sophisticated manner, in Friday’s NRC Handelsblad (a newspaper), when he pointed out the differences between Jean-Paul Sartre and Albert Camus. Sartre could only see reality as political history whereas Camus had a broader look at things. Even in his case, there is history but there is something else surrounding it, passion, beauty and nature. ‘Life! Oh life! Oh Li-i-i-i-ife!’

I could quote here the theories of scholarswho say that the simple fact of our existence exceeds our social identity. Maybe because I was walking through meadows andpast sunflowers, that the world seemed more and more of a paradise to me. A documentary made by a visual artist Anne Verhoijsen came to mind. She simply asked people if they could imagine life outside the boundaries of current affairs. What were their ideals, what did they value and to what did they attach true meaning? She aksed, in short, what their impression of paradise was.

It became an extensive project, for which Verhoijsen spent six years travelling around the world, visiting Hawaii, Latvia, Surinam and Turkey so that she could talk to people about their vision of life. With two groups, she tried in vain to appeal to their imagination. An orthodox Muslim came to a stop by the words story of paradise. ‘It is not a story. It is true’! An Italian atheist kept it simple: ‘I don’t believe in paradise. We are simply matter. I don’t believe in a soul. I don’t believe in anything’.

Those who saw something in the cultural question that the story of paradise brought forth, tried to ponder about life. In countries like Latvia and Bosnia, where life was hard for most people, the matter in question, was taken seriously. The more destitute their circumstances were, the more detailed were their stories of paradise.

A young Latvian soldier was visibly affected by the thought that he could be ‘somewhere else’. Which role would he like to have in the story of paradise, God, Adam, Eve or the snake? ‘I would like to be an angel’. Verhoijsen’s Visions of Paradise which was already released in 2008, seems to become more relevant with each day that passes. Mainly because it shows that while most people belong to a culture and at the same time they try and escape it.

It is noticeable that most people in Morocco saw paradise as place where you no longer have to be afraid. A place without rules where you don’t get punished. ‘I want to live without restrictions. I want to decide for myself what I may or may not do. Then I will not stray from the correct path’.

There is more to life than rules and regulations; there is also life beyond society’s hold, in which the individual is able to choose for his self or herself. This conclusion which was extremely evident during the discussions about paradise is definitely missing during present day discussions with regard to budgetary cuts to funds going to art and culture.

Supporters and opponents with regard to this issue, seem condemned to the political vision; culture is often seen as a national expense or a money machine but there is no realization that art belongs to a part of life that heads society’s order of things. Art participation has nothing to do with being a right or left-winger. Is one considered left when one spends tax money on art? 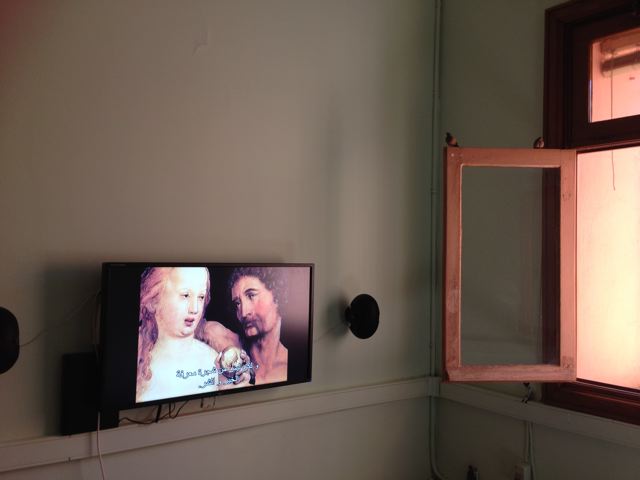 The Marrakech Biennale has already left its indelible mark upon the Red city and this is all thanks to your participation.

Your participation has played a key role in fulfilling our aspirations to open up access to contemporary culture, bring together local and international audience, and engage our immediate environment, especially people who wouldn’t spontaneously get involved in art events and who took part in the Biennale for the very first time. More than 43 000 people visited the main exhibition, about 70 000 people attended the Biennale through the literature, cinema and video and performances in the public space, as well as parrallel and partner projects. By showcasing your work in Marrakech, you have contributed to promoting the importance of contemporary art in North Africa while also reinvigorating the region’s creative scene. Your commitment and creative spirits truly lit up each and every one of the Biennale sites in celebration of art and a culture where everything is possible.

The Biennale came to an end and I think overall it was quite a success. Thanks to the incredible effort and amazing work done by everyone involved, including yourself, we can say the quality of the exhibition, the individual art pieces, the communication and logistics have been better than ever. The results in terms of both local and international participation, and press coverage are wonderful and encouraging.Please find below the link to download the first media report, more press reviews are on their way but I wanted to share the praise and reviews without further delay.

With my very best wishes,